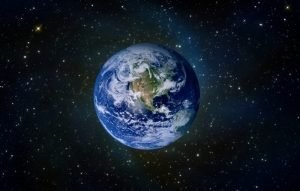 My reaction to the publication of the 6th Mass Extinction paper in 2017 and the IPCC 1.5ºC report in 2018, was to spend winter 19/20 reading papers and reports and listening to online presentations. Needless to say, I became increasingly concerned about the state of the planet.

Like many in the environmental movement, I’d spent the last 30+ years working in my field (nature conservation), engaging in environmental education, and signing petitions etc.. The realisation that we had failed, that habitat destruction, wildlife decline, and pollution had got far far worse was both depressing and motivating – a call to greater action. I had to do more.

A local group of activists invited me to present ‘An Introduction to the Climate Crisis’ to the members of Dartmoor National Park Authority as part of their efforts to get the authority to declare a climate emergency. I’d been mentioning climate change on the end of my Barn Owl Trust presentations since 1989 but never before given a presentation on the subject. 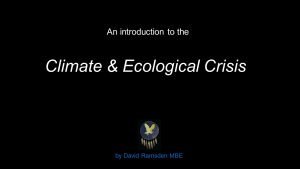 After another 100 or so hours of research and ‘powerpointing’ I delivered it on 21st June 2019, seemingly with the desired effect. After presenting it again to their partner organisations (the DNPA Forum), with a good number protesters present both inside and outside their meeting, DNPA did indeed declare a Climate & Ecological Emergency on 26th July 2019- the first UK National Park to do so.

By chance, whilst giving a Talk on ‘Safer Rodent Control’ to a group of north Devon farmers, I happened to mention that I had with me a short presentation on climate change. To my surprise, nearly all of them wanted to see it(!) and afterwards their questions were all about climate change rather than rodent control. It was at that point that I decided to create my first full length presentation on the Climate and Ecological Crisis. Several hundred hours later, it was ready and I created a dedicated Facebook page using the Talk’s title ‘Climate and Ecological Crisis? What’s all the fuss about?‘. 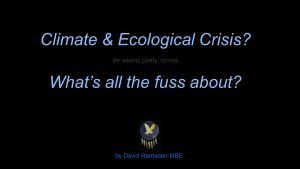 Thankfully the comments I’ve received every time I’ve presented it have been extremely encouraging, so much so that have now made the full length talk available as a Powerpoint Show for other speakers to present.

I am currently giving the talk online, via Zoom and other platforms, and providing two handouts Action points – Personal and Government and Sources of Useful Information. A recording of the talk [version 8 July 2020] is available here.

Note: My climate presentations are not given in the name of the Barn Owl Trust but simply in my own name. 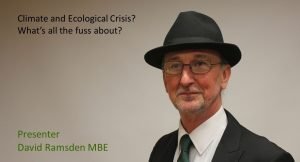